I didn’t either, until I checked for this article. After all, who uses Yahoo anymore, thanks to Gmail’s market dominance? But it’s that time of year again, when Google tells me I’m almost out of space, and prompts me to pay a monthly subscription fee for Google One. Gmail, the free product that encouraged users to archive instead of trash and “never throw an email away”, and pioneered an ever increasing amount of storage… until they didn’t, and monetized.

In light of this, I wanted to take a look back and chart both the history of Gmail and storage prices, and discuss if they’re where they should be or if they’re lagging behind.

Gmail came on the market in 2004 in a limited “beta” release, and was invitation only for a while. I got an invite from my friend Chris, who was very tech-forward and raved about it. Gmail offered 1GB of storage, 10x more than its closest competitor at the time (Yahoo at 100MB), and told users they could archive and keep all their email history. In 2005, Yahoo bumped their storage up to 1GB to match Gmail, who promptly doubled theirs to 2GB.

Gmail then started constantly adding capacity to compensate for incoming emails, and a little counter of increasing space was ever present. It was a neat gimmick. By September 2006, capacity had slowly grown to around 2.7GB, but was tapering off. It didn’t hit 2.8GB until a year later in September 2007.

Up to this point, and even into 2010, I think it’s reasonable to say that Gmail capacity seemed huge. The product was limited to emails, and attachment size was limited to less than 25MB, so it would have been very difficult to exceed the allotted space, even for power users.

However, some things changed in the next few years:

It can be difficult to estimate storage prices, especially at cloud/enterprise levels, but this article from Backblaze was very helpful up to 2017, and digging through several other sources and spot checks of existing pricing gives an educated estimate. 2011 saw a big spike in prices due to flooding at factories in Thailand, but pricing recovered thereafter and averaged out, which is why it’s not reflected.

The following chart consolidates Gmail’s storage history and enterprise storage pricing history per gigabyte, from Gmail’s inception in 2004 to the present day. 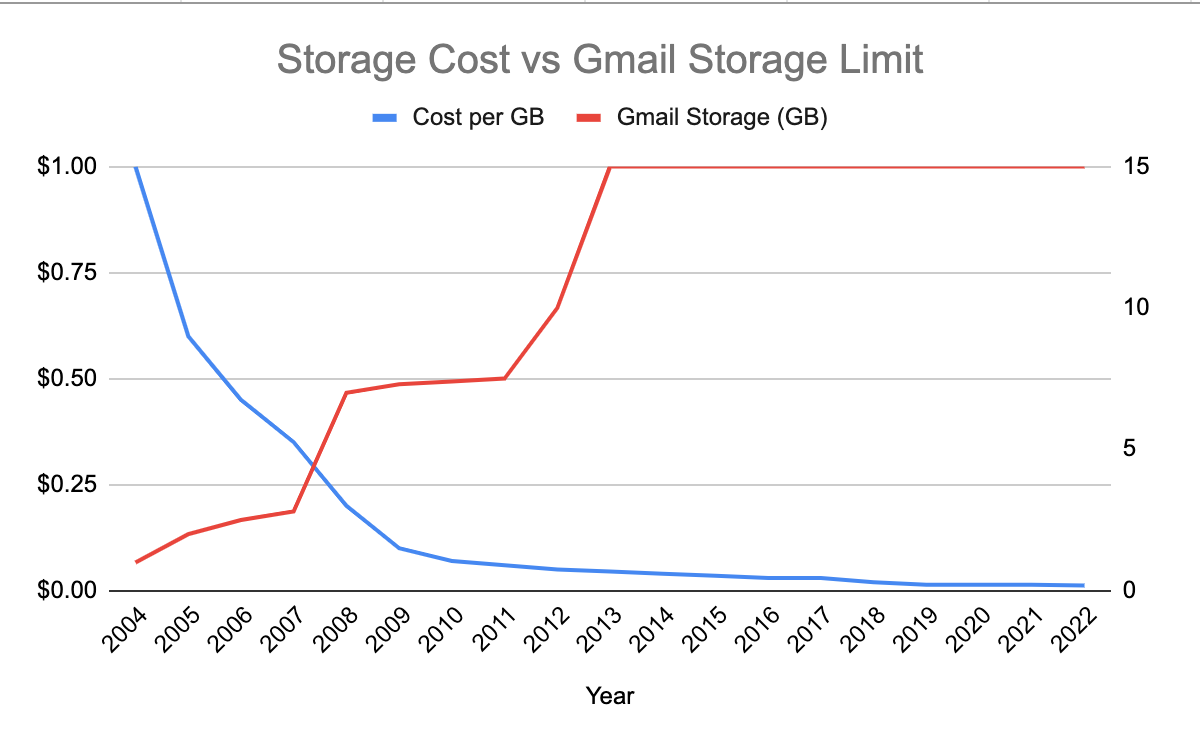 The questions that arise from this data are “What is the value of Gmail?”, and, “Has it kept pace with technology advances? If not, what should it be?”.

Using the information above, the next chart plots the value of Gmail’s storage offering over its entire history. 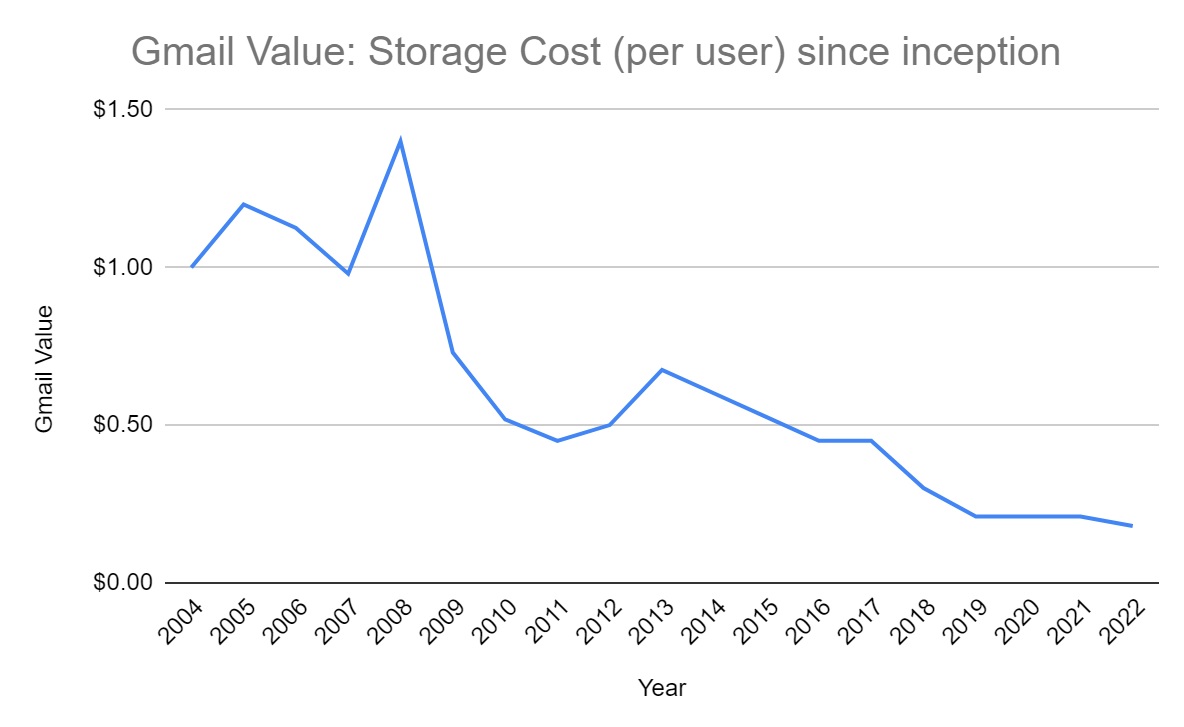 We can now use all of this data to take a look at our questions.

Has it kept pace with technology advances? That answer is clearly No, given how far storage has advanced in the last decade. Strictly from the data, storage costs in 2013 were around $0.045/GB, and today are around $0.012/GB, about 4x cheaper.

A much trickier question to answer is, what should the free limit be today? A market-driven answer is clearly: whatever encourages the most users to pay for Google One! However, given how inexpensive storage is now, the spirit of the original project (never delete an email!), and the profit Google derives mining advertising profiles from email content, the free product can be more competitive.

Using our data and some market interpretation, I think we can arrive at a better answer:

Given this, I propose:

What do you think? Am I spot on, low, or high, in your opinion?

I started looking at all this data out of curiosity and, frankly, incredulity that Google hasn’t increased their storage limit in almost ten years. My initial gut feeling was Google should offer way more than they do, say 1TB like others. After crunching all the data I actually convinced myself that they’d be pricing themselves out of the market if they did so, and that a lower limit is justified, but about 3.5 times higher than what it is now. A 50GB limit would alleviate much of the pressure on average users without cannibalizing the power and business user markets, who need and will pay for Google One.

I hope you enjoyed this article. Collecting all of the data to consolidate into the charts was actually quite difficult, as some of it is hard to come by or is spread out across old blog posts and such. Sources are cited below that helped collect all of this into one cohesive picture.