Friends: “What will you blog about, is there a theme?”

Me: “Not really, I’d probably just do a running log of the weird stuff I research anyway on a daily basis.”

And on that note, let’s look at the nuclear bomb in Mission Impossible: Fallout.

Once again, the world is threatened by a nuclear device (or three). Eventually, Benji gets around to describing it for us – a man-portable bomb with a 5 megaton yield.

This sounded off to me. As it happened, I’d just been researching nuclear bomb yields and detonation effects (don’t ask) and had some of the information ready at hand.

The “Taylor limit”, named after physicist Ted Taylor (original source), specifies a 6 kiloton per kilogram maximum limit for the yield-to-weight ratio of a fusion device. If we allow that the super-smart terrorists in this movie achieved this limit, that means the bomb would weigh more than 1800 pounds. Not exactly something I’d want to throw in my backpack. It would also therefore be a lot bigger than the device shown later.

Obviously the movie felt the need to amp up the stakes. But why? Can audiences really gauge the severity of a threat based on a stated nuclear yield, or does “mega” just sound cooler? Do you know what a nuclear explosion of a particular size would actually do?

I didn’t either. Let’s take a look at a real size that’s practical for a person to carry, and the impact it would have on a real city.

NUKEMAP is a grimly fascinating tool to visualize nuclear fallout. I’ve set the explosion to occur in Dolores Park at the Mission, San Francisco. 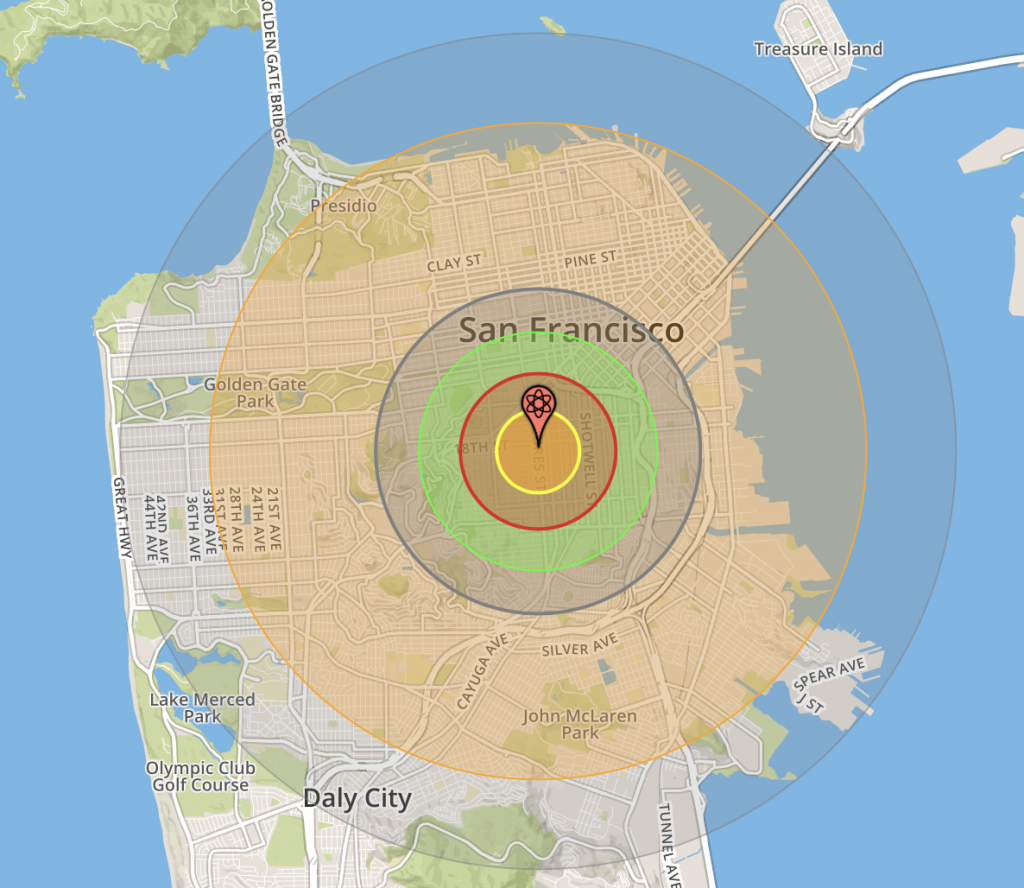 Wow. What do those rings mean? Basically, it’s all bad news. The mushroom cloud would be 9 miles high. Everything within two square miles (6 square km) will essentially be gone, everything within 40 square miles will have medium damage and third degree burns. That’s basically the entire city, though you might survive at Ocean Beach. Fatalities and injuries would exceed half a million people. You can see more for yourself at the link to the map with these settings here.

With damage this extensive, why exaggerate? Tom Cruise, take note for Mission Impossible 7 – have the fact checkers keep it realistic, it’s scary enough.

2018-11-29
Previous Post: NOI and Cap Rates: Adventures in real estate investing
Next Post: RVs (and their relationship to a gap year)