By: Matt Campbell
In: Investing
With: 0 Comments

I heard from several of my friends while I was in California that they found the investing articles informative. I sat down a few days ago and ran through all of the numbers into November, and wanted to give an update here on progress.

As you may recall from my previous post, I’ve experimented with higher dividend investing this year, vs. growth, to generate income while I’m on sabbatical. I used a mixture of ETFs as well as some stocks like AT&T. Dividends are not guaranteed and are only announced several weeks before payout (this is referred to as the declaration date), so predicting income months into the future entails looking at historical performance and making an educated guess. I used the 2018 historical figures to predict my 2019 payouts and generate the chart I showed in the April post, an average of about $1000/month passive income: 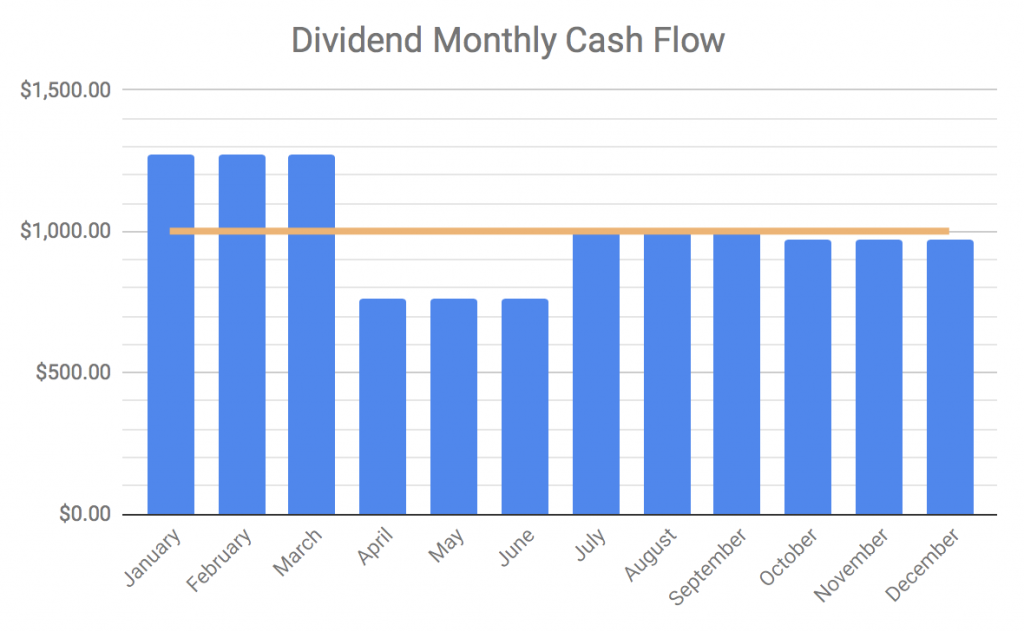 Charles Schwab announced that as of October 7 this year, they would charge zero commission fees for stock and ETF trades (vs. the previous $4.95 per trade). E*Trade and Ameritrade almost immediately followed suit (previously charging $6.95 per trade) as did Fidelity a few days later ($4.95/trade). This is a great move that will save a lot of people a reasonable amount of money that is otherwise “wasted”.

How did this happen?

Well, startups like Robinhood are attributed with being the first to offer $0 trades as their main draw. This pushed Vanguard to offering commission-free trades on 1,800 ETFs (even from direct competitors like Fidelity) in August 2018. The race to the bottom ensued, and thus far, consumers are winning. Market analysts seem to be worried that this is going to cause a lot of short-term trading churn that will hurt [impulsive + overly exuberant] consumers, but thus far there’s no evidence of this.

Another change in the past six months is the Federal Reserve cutting interest rates not once, not twice, but three times. The last time the rate was lowered was in December 2008 during the recession. Rate cuts are a tool employed in an attempt to bolster the economy, even though currently, the economy is very strong – so if you’re confused, you’re forgiven, it doesn’t seem to make much sense with indexes hitting record highs. The direct effect is a lending rate decrease for home and car loans, but the ripple effects extend much farther into the market and impacted some of my gains.

Pretty spot-on, with a couple of interesting deviations to talk about. June through November actual income was $6,662.17, or $1,110.36 a month. My predicted income based on 2018 projections was $1,064/month, so it was good to see that things were close and slightly over.

Two ETFs that really underperformed were VNQ and FREL. These are REITs that invest in real estate, and in 2018, paid out high 4-5% dividends. Instead, they paid out roughly half of what was expected in September. What the?!?

Remember the discussion above regarding the Fed interest rate cuts? That has a direct effect on real estate and, correspondingly, real estate investments. Both funds (from different companies, Vanguard and Fidelity respectively) got hammered. VNQI, the international version of Vanguard’s VNQ, slightly underperformed but much less so, since it wasn’t as impacted by the U.S. interest rate cuts.

One stock that overperformed despite a unique handicap was TSM (TSMC, a semiconductor manufacturing company). Because TSMC is based in Taiwan, each dividend is hit with a 21% foreign tax charge that’s automatically deducted. Boo!!  However, TSMC announced this year that they’re switching from a yearly dividend to a quarterly, and increased the dividend as well as adding a bonus payment this year on October 17th, and another coming January 16, 2020. Even with the foreign tax taken out, TSM income ended up 25% higher than predicted this year. Sweet!!

All in all, the highs this year balanced out the lows, and I ended up right on track with my predictions, which I was happy about. I also learned about foreign stock fees, and had to do some googling to track down why specific funds like VNQ had underperformed so badly, which ended up being pretty interesting as you see the direct effects that things like the Fed interest rate change have on market funds.

I’ve largely ignored discussions about growth since the focus has been on income generation, but that’s another area that’s done well. AT&T in particular is noted for their great dividend but extremely poor growth compared to, say, the major tech companies. In fact, if you’d purchased AT&T at some points of 2013, you’d actually have lost value today. Since January this year, however, they’ve grown almost 25%. You can see from the 5 year history below how unusual this current growth is.

Now, bearing in mind Apple has grown 74% in this same time period (and Netflix 285%), it’s not amazing, but still very solid.

Hope you’ve enjoyed this update and seeing the details. I have to say, dividend investing feels a little like magic – it’s great to have reasonable sums of money coming in passively with no work on my part. Thanks for reading!