My family has been using YouTube TV for about 4 months now. Overall it’s been a positive transition, and a huge cost savings. There have been a couple of positive announcements since signing up. First, several of the networks holding out on fast forward/rewind capability for recorded programs relented, so now every recorded show allows FF/Rewind/pause. (Personally, I never experienced this, but it’s a good change.) Second, PBS is coming to the network at some point, for the first time ever on a streaming platform. Great news, and good to see that the platform is evolving for the better over time.

YouTube TV looks a lot like the YouTube app, with some variations. The user interface also changes depending on what platform you’re using. For instance, on iOS devices, you get a video preview of any live show (the video begins playing in a small window). This is really nice in the main Live program guide, as you can scroll through and see exactly where each show currently is if you want to jump in, though if it’s currently playing an ad, you won’t get the preview until it resumes. On other devices, the windows are static, no video preview.

You only have three main choices: Library, Home, and Live. 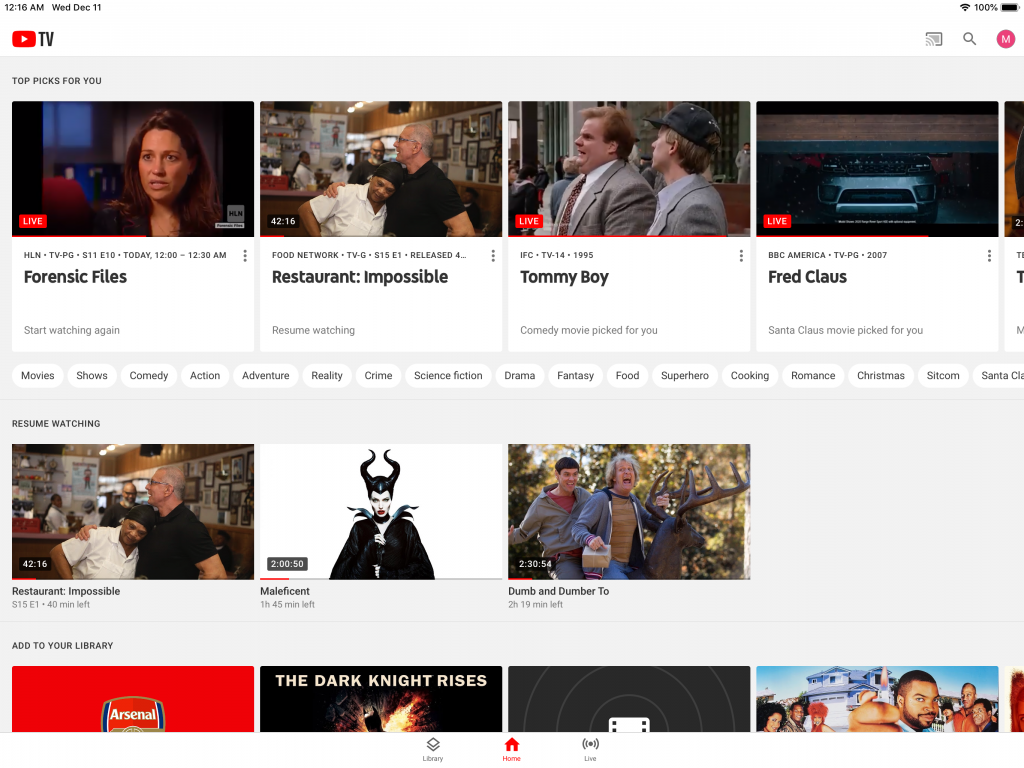 The Home screen is where you start. It shows some live programming you might like, recently added shows and movies, and a resume feature to pick up where you left off. I often check the movies section here and queue up new shows to record. 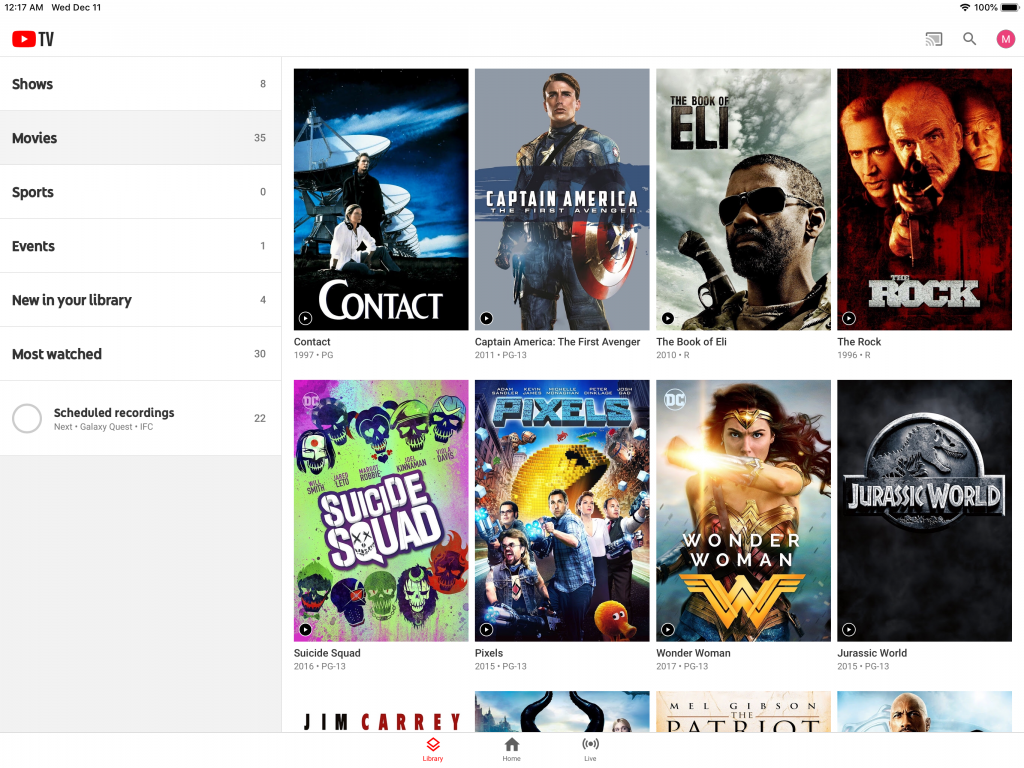 Library is essentially the DVR section, all the shows you’ve saved. As I mentioned in the previous post, it has some quirks – video on demand shows and movies will get added immediately, but with unskippable ads. This remains true until the show is “recorded”, or in other words, until the next airing on a network. Once that is complete, you can then FF/rewind to your heart’s content. Figuring out when that will be can be tricky, you have to delve into scheduled recordings to see when the next airing is. If there isn’t one before the show expires from VOD, you lose it. This confused me in the beginning when shows would disappear from my library after I added them.

This is your program guide. It’s pretty responsive and, as I mentioned in the intro, iOS shows live previews for each channel as you flip through, super helpful. You can also reorganize the station order from your computer to prioritize the ones you want up top, and even remove stations you don’t watch to slim it down. That’s individualized for each account, also, so all six accounts can have completely different Live settings along with their own unlimited DVR.

For our family, YouTube TV has been great. My dad still gets most of the programming he used to watch, and can now record and pause it, which he loves. He also tends to watch almost exclusively on his iPad now since it’s so convenient. My mom really stresses the “unlimited” part of the program and has literally hundreds of shows saved with full seasons of content. She occasionally runs into hiccups – three times now she’s seen “this content is not available for streaming”, and there’s no helpful input on why or what to do. A couple of times she’s been unable to find a listing of the show she wants when searching for it, even though it’s advertised and coming on the air in a couple of days. And, most intrusive, the ad server crashes frequently, particularly on HGTV. It will get hung on a black screen without recovering, you then have to exit the app completely and restart it. Sometimes the show will then play without ads, other times, multiple ad sequences will be buffered at the spot you left off and you have to watch 10-plus minutes of the exact same ad, playing over and over. Not a great user experience. But with six accounts possible, many supported device types, unlimited DVR for each user, and a great channel lineup including all local stations, it’s been more hits than misses.